Cherry-spruce rust caused by Thekopsora areolata (Fr.) Magnus is a serious cone pathogen of Norway spruce [Picea abies (L.) Karst.]. The rust causes great economical losses in seed orchards specialized in the production of high quality seeds. Germination range of T. areolata aeciospores from rust populations (spore sources) in seven Finnish Norway spruce seed orchards was tested on water agar and malt agar at nine temperatures varying between 6–30 °C. The temperature range of spore germination was high varying between 6 °C and 27 °C, while germination was retarded at 30 °C. The peak in germination rate of all spore sources occurred between 15–24 °C. In a model with fixed effects of agar media, temperature and spore source, temperature had the most significant effect on germination. Spore source had a less significant effect, while agar media had a non-significant effect on germination. The rust was able to germinate at low temperatures corresponding to temperatures when the thermal growing season starts at 5 °C in the spring. As spores from cones from both the spruce canopy and the ground showed very similar germination ranges, it indicated the great capacity of all spores of the rust to germinate early in the spring. Hot temperatures with over 30 °C drastically reduced germination of the rust.

Cherry-spruce rust, Thekopsora areolata (Fr.) Magnus, is a serious pathogen of cones of Picea spp. in Europe and Asia (Gäumann 1959; Kaitera et al. 2014, 2017). It causes serious seed losses with economical importance especially in seed orchards specialized in the production of high quality seeds. Due to irregular flowering and irregular mast year cone crops, there is a lack of Norway spruce [Picea abies (L.) Karst.] seeds for production of seedlings for silviculture (Himanen 2016). Good cone crops with severe T. areolata damage have been reported in Finland in 1989 (Nikula and Jalkanen 1990), 2000 (Savonen 2000) and 2006 (Kaitera 2013). Thekopsora areolata causes premature opening of cone scales, reduces the number of seeds in cones and may cause 10-fold reduction in seed germination (Kaitera and Tillman-Sutela 2014). The rust has a complicated life-cycle: it spreads from old infected cones to young leaves of alternate host plants in the spring and early summer (Kaitera et al. 2009). The main alternate hosts of T. areolata are Prunus spp. (Gäumann 1959; Kaitera et al. 2014, 2019). Recently, T. areolata was shown to be heteroecious without an ability to spread from Picea to Picea (Kaitera et al. 2019). The aeciospores of the rust are viable from aecia of old infected cones for years (Kaitera and Tillman-Sutela 2014), which is beneficial for the rust to survive over unfavourable seasons and to infect Prunus for a long time. Temperature requirements for the germination of aeciospores from old infected cones are, however, unknown. The rust produces uredinia on Prunus, where urediniospores spread from tree to tree. Telia are produced on Prunus where basidia develop after overwintering of the leaves in the spring. Basidiospores from germinating basidia then infect pistillate cones of Picea (Gäumann 1959). The rust also infects shoots of Picea, where the rust sporulates and forms cankers (Roll-Hansen 1947). The rust may also occur at latent stage in shoots (Hietala et al. 2008). Genetic variation between rust populations in Scandinavia is low (Capador et al. 2020).

Aeciospores of T. areolata were collected from seven cones bearing unopened aecia. Each cone was from a different Finnish Norway spruce seed orchard in southern Finland. Each cone was selected randomly among ca. 10 cones per seed orchard based on their moderate to high spore viability. These cones were collected from tree canopy in five seed orchards (sv = 1, 2, 5–7), from fallen tops in one seed orchard (sv = 4) and from the ground in one seed orchard (sv = 3). The 10 cones from each seed orchard represented cones with aecia that included viable spores i.e. spores that were potentially capable of infecting Prunus and thus suitable to study pathogenicity of the rust. Those cones with aecia that were contaminated by secondary fungi (e.g. Penicillium), with old aecia that had already sporulated most of their spores and the number of spores was very low, were excluded from the used material. To avoid using spores that did not germinate at all in pathogenicity tests, we screened briefly germination of a low number of spores from the cones at room temperature. Therefore, we could say at a very general level that our spore material had moderate to high germination. All seven cones represented different rust populations, but we did not identify spores from the cones genetically in this study. However, in another study, a total of 35 cones from the same rust populations as in this study were used in Prunus inoculations, where the rust populations were identified genetically as T. areolata (Kaitera et al. 2019).

Spores from the selected cones were then dusted on water agar (1.5%) and malt agar (2%) in Petri dishes (one spore source per dish) with a paintbrush. One inoculated plate of each spore source was then incubated in either a growth chamber (Binder) or a climate chamber (Climacell) in the dark at nine temperatures. The incubation temperatures were: 6 °C, 9 °C, 12 °C, 15 °C, 18 °C, 21 °C, 24 °C, 27 °C and 30 °C. The lowest temperature corresponded to the temperature associated with the beginning of the thermal growing season in the spring. The highest value represented a hot summer temperature that might be lethal for the rust. The plates were incubated for 2 h, 6 h and 24 h after which the germination rate of the spores i.e. number of spores with or without a germ tube was counted from 10 randomly chosen microscopic fields on the plates using a light microscope. The microscopic fields on the plates were checked by moving each plate with spores under a light microscope and focusing on the agar surface in the middle of the objective following counting of spores with a germ tube. Then the plate was moved horizontally a random length, the microscope focused on another field on the agar surface and the germination counted from another field.

The germination rate of the aeciospores was modelled with agar media, temperature and spore source after incubations after both 6 h and 24 h as effect variables using the glimmix procedure of SAS software (SAS Institute Inc., version 9.4). Depended variable germination was modelled as continuous proportion from zero to one (or 0% to 100%) with beta distribution. Two independent variables spore source and agar were used as factors and the third independent variable temperature as continuous one. Response temperature was not linear and therefore, the appropriate function form was quadratic. The Fixed Effects test was used to compare the effect of different variables and their interactions on the germination rate of the spores. The best selected model that gave good generalization and interpretation of parameters based on AIC, residuals and residuals’ normality is: 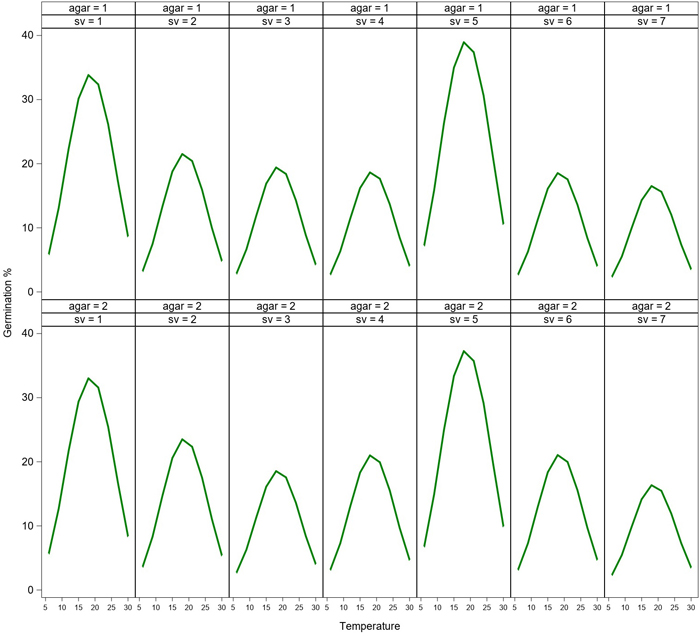 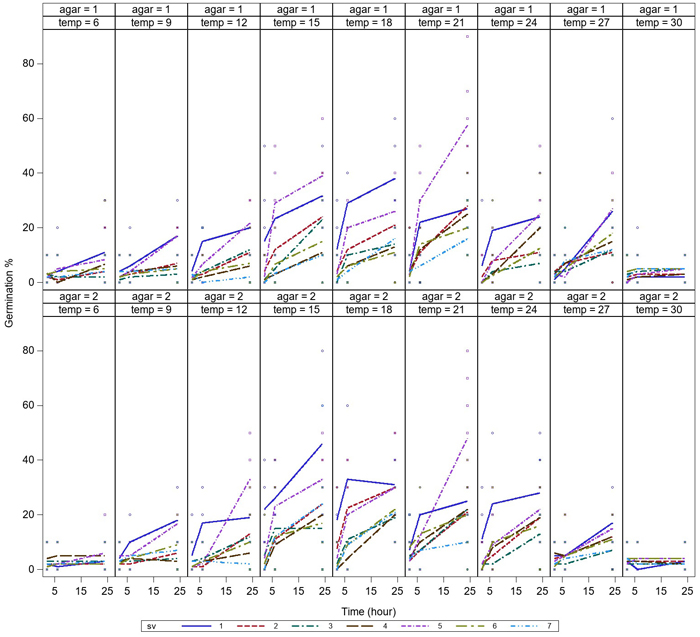 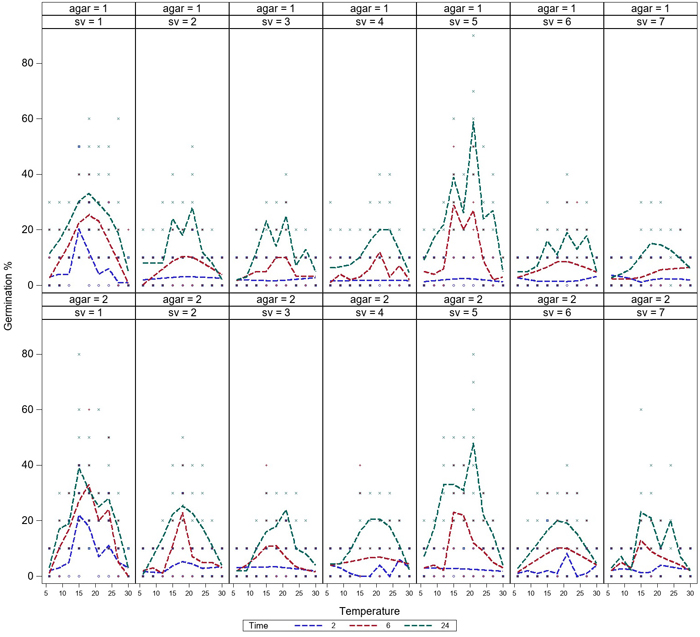 This study showed that T. areolata aeciospores germinate at a large range of temperatures. The rust is able to germinate at very low temperatures close to the temperature when the thermal growing season begins (5 °C). This is clearly an advantage for the rust as it is able to infect and germinate on alternate hosts in the early spring as their leaves develop. Formation of uredinia within 10–14 days on aeciospore infected young Prunus leaves was recently shown by artificial inoculations (Kaitera et al. 2019). The first uredinia develop on Prunus in late May on natural plants in seed orchards in Finland (Kaitera, unpublished). This indicates that leaf infection by aeciospores occurs in the spring at low temperatures close to the lowest temperature limit of germination of the aeciospores reported in this study. High temperatures (30 °C) clearly reduce aeciospore germination as shown in this study, and therefore, hot summers may hinder rust spreading and epidemics.

The optimal germination of T. areolata aeciospores and the range of germination were about the same as for Cronartium flaccidum (Ragazzi et al. 1986, 1989). The optimal temperatures were higher and temperature range narrower for C. ribicola (Van Arsdel et al. 1956), and C. fusiforme and C. quercuum f. sp. fusiforme (Siggers 1947; Kuhlman 1989) than for T. areolata. Therefore, the temperature ranges for these two pathogenic rust genera, Thekospora and Cronartium, did not drastically differ from one another.

This study indicated that besides temperature also spore source affects spore germination. This is probably due to infected cone material of various age, stage of aecial maturation, other fungal unknown characteristics like virulence of the rust or the host response to rust sporulation on different clones that vary in seed orchards. Cones that remain intact in tree canopy contain aecia that mature at various time. Some of these cones may contain viable spores for years after initial formation as was shown by Kaitera and Tillman-Sutela (2014). Also infected cones that fall down may contain viable spores, but their germination rate is lower than in most cones that remain in the trees (Kaitera et al. 2019). The temperature curve of germination, however, is similar regardless of the spore source as shown in this study. Also spores from infected cones from both tree canopy and from the ground are pathogenic on Prunus (Kaitera et al. 2019).

In conclusion, T. areolata is able to germinate under very low temperatures, and thus, infection of alternate hosts can be efficient already in early summer from aecia of old infected cones. Therefore, control of cherry-spruce rust can be improved by removing old infected cones from the spruce canopy especially in seed orchards.

We thank Mr. Timo Mikkonen for preparing the agar media for the germination tests. We also thank Finnish Ministry of Agriculture and Forestry for financing the MESIKE project, where this study was included. Siemen Forelia Oy and Tapio Palvelut Oy are also acknowledged for the cone and spore material used in this study.

Ragazzi A (1992) Production of telia by Cronartium flaccidum from infections with aeciospores and with urediospores. Phytopathol Mediterr 31: 123–125.

Ragazzi A, Dellavalle Fedi I, Mesturino I (1989) The effects of some variables on the production of uredinia and telia of Cronartium flaccidum. Phytopathol Mediterr 28: 43–45.