Global Covid-19 pandemia has had diverse effects on scientific research. After the first shock of moving from office to remote work at home, many scientists may have found more time for research work. On the other hand, teaching personnel must have learned different distance learning methods which is, indeed, time consuming. These changes in working routines are reflected also to the scientific publishing. More time is needed for the reviewing process and revision of papers. So far, everything has gone quite nicely at least in Silva Fennica. In the future, more difficulties can be expected since different field tasks and laboratory experiments have been delayed. Most of the international scientific conferences that normally yield a high number of scientific papers for proceedings volumes and journal special issues have been withdrawn or moved to the future.

Current pandemia has also different effects on visiting forests. Because of the restrictions for travelling abroad or even within one’s own country, many people have spent their free time in local or national recreational forests. This has been a strong practice in Finland during 2020. Highly increased visitor numbers are reported in national parks and other recreational nature areas, especially in the southern part of the country. In the case of the most popular places, such as the National Scenery of Koli, there has been even congestion in the trails and long queues in the parking lots. This has caused increased trail erosion and a lot of mudding in wet spots. Still the overall effects of the increased forest related recreation experiences are positive. I personally hope that these visits have inspired new research ideas and motivation for forest scientists.

I also share my own experiences here. When I was younger, I used to spend a lot of time in forests. This was related e.g., to mountain biking and especially picking mushrooms. Because of my profession, I have worked and taught in forests. However, during the last 15 years I have mostly worked in the office and although I have frequently visited national parks, I had somehow lost connection to the “basic” forests. I was not even familiar with the forests nearby the town where I live. All this changed this year. I re-searched the forests. Different kinds of trips to forests have now been part of the everyday life in my family. We visited several conservation areas but also rather ordinary managed boreal forests. This is possible in Finland because we have the everyone’s right to forests.

All know the famous national parks, but many other conservation areas are also highly interesting. They are not so populated, but their reachability differs. One can find surprises from these areas e.g., desolated sand beaches in the middle of “nowhere”. We also saw many animals, such as different birds and even snakes in those visits. I personally discovered the scenic beauty of forests, even in the colors of a single trees. My home province is rather hilly, which gives possibilities to observe the impressive large-scale landscapes formed by lakes and forest from the hill tops. Still to mention, during year 2020, the mushroom and berry yields have been amazing, among the best I have seen ever. As already said, the interest in forest walks is not restricted only to the conservation areas. Walking in very basic managed forest areas can give very positive experiences (Fig 1). I really think that our numerous forest visits have given me new flow and food for thought also for scientific publishing. 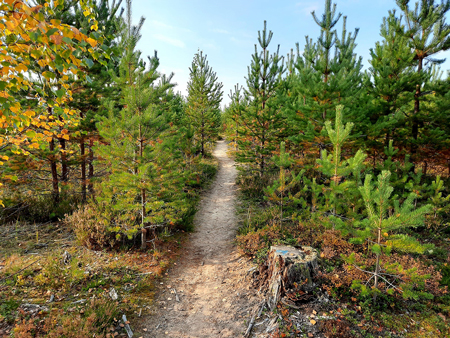 This year has been different in many ways. Everyone’s right to forests has really been in wide use in Finland. Correspondingly in Silva Fennica, we continue promoting open science, not only open access but also improvements in reproducibility and research transparency as stated in the previous Editorial. We work for Everyone’s Right to Forest Science.