+ 1 Introduction
+ 2 Materials and methods
2.1 Rust estimation and sampling of plants
Fig. 1. Locations of investigated Norway spruce ..
Table 1. Plant species investigated for uredinia..
2.2 Morphological identification of the rust fungi
2.3 Statistical analysis
+ 3 Results
3.1 Sporulation of Thekopsora areolata and an unspecified rust on wild plants in the sample plots in seed orchards
Table 2. Number of sample leaves of Vaccinium my..
3.2 Morphology of an unspecified rust on sample leaves
Fig. 2. A. Violet pustules (black arrows), B. ur..
Fig. 3. A. Uredinia (black arrows) and B. uredio..
+ 4 Discussion
+ Acknowledgements
+ Declaration of openness of research materials and data
+ Authors’ contribution
+ References

Thekopsora areolata (Fr.) Magnus is a serious cone pathogen that reduces seed crop of Picea abies (L.) Karst. and other Picea spp. Natural sporulation of T. areolata was investigated in nine Norway spruce seed orchards suffering from severe successive T. areolata epidemics in Finland. Habitats occupied by Vaccinium myrtillus L., V. vitis-idaea L., Empetrum nigrum L. and Calluna vulgaris (L.) Hull, and a number of other wild species belonging to ground flora were investigated for Thekopsora areolata uredinia 9–10 times in May–September 2018–2019. Occurrence of Thekopsora uredinia was estimated in current-year leaves of the plants in ca. 25 sample plots of 1 m2 in each seed orchard. A sample of plant leaves with rust uredinia or necrotic pustules were collected from each plot. No rust fruiting stages of T. areolata were found on any of the test species of ground flora. However, rust uredinia were observed regularly on leaves of V. myrtillus and V. vitis-idaea in all seed orchards between mid-July and the end of September. Rust sporulation started on V. myrtillus in July and on V. vitis-idaea in August. Based on symptoms, uredinia and spore morphology, the rust on both V. myrtillus and V. vitis-idaea was identified as blueberry rust, Naohidemyces vaccinii (Jørst.) S. Sato, Katsuya & Y. Hirats. ex Vanderwegen & Fraiture. The uredinial stage of the rust on Vaccinium spp. were described. No evidence of natural sporulation of T. areolata on wild plant species other than Prunus was observed in Finnish Norway spruce seed orchards.

The alternate hosts of T. areolata are known to belong to the genus Prunus (Gäumann 1959; Kaitera et al. 2014, 2017, 2019). Seed orchard managers try to control and remove Prunus padus L. populations from within and the vicinity of orchards. However, the infection rate can be high even in seed orchards where P. padus appears non-existing (Kaitera et al. 2009, 2021b). This can be either due to efficient long-distance spore dispersal or there exist other alternate hosts than Prunus within the seed orchards.

Rust genera Thekopsora and Pucciniastrum have been considered to belong to the same genus, Pucciniastrum sensu lato, although teliospores of Thekopsora are produced in plant epidermis and those of Pucciniastrum in mesophyll (Cummins and Hiratsuka 1983). Yet, the phylogeny of these two genera is still unclear (Maier et al. 2003). Recently, however, their phylogenetic relationship was reviewed (Aime and McTaggert 2021). In general, the rusts in these genera spread via species of Rosaceae, Ericaceae, Rubinaceae, Asteraceae, Hydrangeaceae and Boraginaceae (Gäumann 1959). Other Thekopsora and Pucciniastrum rusts have been described on e.g. Vaccinium spp., Arctostaphylos spp., Erica spp., Calluna spp. and Galium spp. (Gäumann 1959; CABI 2019).

Epidemics of T. areolata have been reported in remote locations (Nikula and Jalkanen 1990) and seed orchards (Kaitera et al. 2009), where Prunus species have either low prevalence or are missing, suggesting that other species than Prunus might serve as alternate hosts for the rust. The aim of the study was to clarify, if other plant species than Prunus can spread T. areolata under natural conditions in Finnish seed orchards, and therefore, to investigate and describe the natural sporulation of T. areolata on species of Ericaceae and some other species belonging commonly to the ground flora in Norway spruce seed orchards in Finland. Recently, we tested by artificial inoculation the susceptibility of a number of species to T. areolata (Kaitera et al. 2019, 2021a), the current monitoring of natural sporulation of rusts on various plant species providing supplementary evidence. It was also aimed to describe another rust found commonly on Vaccinium in seed orchards.

2.1 Rust estimation and sampling of plants

Plant communities of Vaccinium myrtillus L., V. vitis-idaea L., Empetrum nigrum L. and Calluna vulgaris (L.) Hull growing within seed orchards, were investigated for rust uredinia in nine Norway spruce seed orchards in southern Finland (Fig. 1; Nikkanen et al. 1999) in May–September 2018 (nine times) and 2019 (eight times). The sampling dates are presented in Table 1. Young leaves of the plants growing in homogenous habitats of ca. 1 m2 were checked visually in the field. The plant communities covered various areas within the seed orchards, and some plants were either missing or with very low frequency in some orchards. In each seed orchard ca. 25 habitats per species were randomly selected for the investigation. In addition, other common plant species of the ground flora were also checked visually for rust fruiting stages during some of the sampling dates (Table 1) at the same time, when T. areolata sporulated on Prunus padus L. in the seed orchards (Kaitera et al. 2021b). When leaves with rust symptoms including violet pustules with whitish to yellowish uredinia (Kaitera et al. 2019) were observed, a sample of ca. 25 leaves per sampling time were collected to paper bags and transported into laboratory for rust checking. 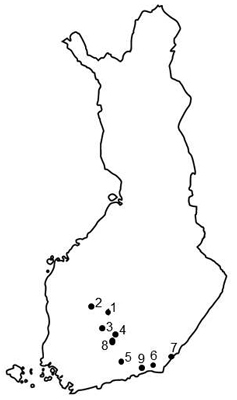 2.2 Morphological identification of the rust fungi

The morphology of rust pustules on the sampled plant leaves was described. The size (length and width) of ca. 150 rust pustules carrying uredinia were measured. The diameters (length and width) of ca. 450 uredinia were measured. In addition, the diameters (length and width) of 100 urediniospores on both Vaccinium myrtillus and V. vitis-idaea were measured. The diameters were compared to species descriptions in the literature (Gäumann 1959; Sato et al. 1993). Typical rust pustules, uredinia and urediniospores were photographed. In case uredinia of T. areolata were found, their morphology was compared to reference material from inoculations with T. areolata on Prunus (Kaitera et al. 2019). The measurements were done using stereo (Meiji Techno RZ, Meiji Techno Co., ltd, Japan) and light microscopy (Meiji MX, Meiji Techno Co., ltd, Japan) with magnification up to 600 x.

The average diameters of rust pustules, uredinia and urediniospores were counted and compared with t-test using SAS software (SAS Institute Inc., version 9.4) between V. myrtillus and V. vitis-idaea. The diameters of uredinia and pustules of the rust on V. myrtillus were compared between the collection times (2018 and 2019), and between seed orchards (observations from different sampling times pooled together) with Tukey’s test of one-way ANOVA.

3.1 Sporulation of Thekopsora areolata and an unspecified rust on wild plants in the sample plots in seed orchards

Unspecified rust pustules were not observed on other species of ground vegetation except on Vaccinium in any of the seed orchards regardless of the sampling date and year of investigation. However, orange-yellowish uredinia of an unspecified rust were observed on V. myrtillus and orange-yellowish-brownish uredinia on V. vitis-idaea. Uredinia of the rust occurred commonly on V. myrtillus in nine seed orchards in 2018 and in four seed orchards in 2019 (Table 2). Urediniospores were formed from mid-July to the end of September in 2018. In 2019, sporulation was observed in the second week of July, which continued until early September. On V. vitis-idaea, uredinia were detected in three seed orchards both in 2018 and 2019. Sporulation occurred in early September in 2018 and late August in 2019 (Table 2).

3.2 Morphology of an unspecified rust on sample leaves

Other rust species were observed on Vaccinium species in the seed orchards. The rust on both V. myrtillus and V. vitis-idaea was identified as Naohidemyces vaccinii. This species is common on Vaccinium spp. in Norway (Aamlid 2001). Based on our results, the rust was also common on V. myrtillus but less frequent on V. vitis-idaea in the seed orchards in southern Finland, where the rust sporulated from mid-July to September. The sporulation occurred earlier on V. myrtillus in the seed orchards, which is probably due to overwintering of the rust as mycelium on V. myrtillus (Gäumann 1959) that allows the rust to form uredinia rapidly on blueberry leaves in early summer. Symptoms and spore morphology of the rust agrees with descriptions in the literature (Gäumann 1959; Sato et al. 1993; Aamlid 2001). The rust had bigger uredinia and longer urediniospores and it sporulated later on V. vitis-idaea than on V. myrtillus. However, this variation in spore morphology agrees with morphological comparison between T. myrtillina P. Karst. on V. myrtillus and T. vaccinii (Jørst.) Hirats on V. vitis-idaea (Gäumann 1959). In a recent review, Naohidemyces was grouped to Milesinaceae, Thekopsora to Coleosporaceae and Pucciniastrum to Pucciniastraceae (Aime and McTaggert 2021). Longer and wider uredinia on V. myrtillus at the latest time of collection in September compared to collections earlier in July and August is explained by the development of uredinia to their full size during the growing season.

In conclusion, Thekopsora areolata did not fruit and sporulate on wild species of Ericaceae or any other common species of ground vegetation in Finnish Norway spruce seed orchards. As neither the inoculation studies nor inventories on wild plants species during rust epidemics in 2018–2019 revealed any other species that were susceptible to the rust and able to spread it besides P. padus, we conclude that Prunus spp. are the only susceptible species capable of spreading the rust in Finnish Norway spruce seed orchards. Therefore, control of T. areolata should be concentrated only on Prunus species in Norway spruce seed orchards. Blueberry rust is common on Vaccinium myrtillus and occasional on V. vitis-idaea in southern Finland, where it may cause early withering of leaves of Vaccinium spp.

This study was part of the MESIKE (https://www.luke.fi/wp-content/uploads/2018/11/Yleisesittely.pdf) and SITKE (https://www.luke.fi/projektit/sitke) projects financed by the Finnish Ministry of Agriculture and Forestry. We thank Siemen Forelia Oy and Tapio Palvelut Oy for the use of their seed orchards for the study.

Declaration of openness of research materials and data

The research materials and data are available on request from the authors.

Kaitera: Planning of the study, writing of the manuscript, field inventory and data collection, laboratory work, microscopy and photographing of the samples.

Ylioja: Organising the field work and reviewing the manuscript.

Karhu: Statistical analysis of the data.