Seed and pollen production in seed orchards have been studied extensively. However, most of these investigations only considered data from one or a few commercial seed orchards gathered over a limited number of years (Griffin 1982; Ying et al. 1985; Fries 1994; Burczyk and Chalupka 1997; Matziris 1997). Some studies have followed flowering and seed production over longer periods in individual seed orchards of conifers such as P. sylvestris (Kroon et al. 2009), Picea abies (L.) Karst. (Nikkanen and Ruotsalainen 2000), Pinus taeda (L.) (Schmidtling 1983), Pseudotsuga menziesii (Mirbel) Franco. (El-Kassaby et al. 1989), and Tsuga heterophylla (Raf.) (Ross 1989). These efforts yielded valuable information on the general progression of fruitfulness over time but provided limited insights into the effects of different management regimes on traits important for seed production.

Various authors have compiled production data from existing seed orchards in order to predict the future performance of new orchards (Ilstedt and Eriksson 1982; Hannerz et al. 2000). These compilations provide useful information on the influence of soil properties and climate on seed production but provide no information on the effects of different management regimes.

As an orchard develops, its trees may become too tall for efficient management. This makes management activities in the orchard excessively time-consuming and expensive, and may reduce the effectiveness of activities such as supplemental mass pollination or protection from insects and fungus. Crown pruning is therefore widely used to control the trees’ height growth. Several pruning and crown management experiments in a wide range of conifer species have been reported and reviews of the literature data have been published (Werner 1975; Owens and Blake 1987; Ho and Schooley 1995). Unfortunately, most of these experiments examined relatively few treatments over comparatively short periods of time, making it difficult to generalize their results.

The initial spacing in clonal seed orchards is normally wide enough to give crowns full exposure to sunlight for 15 to 20 years without any need for roughing. In addition, the spacing must be such that there is room for machines to operate without being so wide as to compromise the efficiency of land use. The most commonly used spacings in soil-based seed orchards are 5 to 7 metres between rows and 4 to 7 metres within rows, giving stand densities of 200–500 trees per hectare. There are also more dense orchard designs with up to several thousand trees per hectare (Setiawati and Sweet 1996) .

Drögsnäs experimental seed orchard was established in 1990. The seed orchard is located in central Sweden, at 59°37´N, 12°56´E and 80 m a.s.l. The orchard site extends over approximately 5 ha and the effective area (i.e. the area of the experimental plots) is 2.7 ha. Some tree mortality occurred during the years after planting (1991–1995); the dead trees were replaced with new grafts. Grafts that died after 1995 have not been replaced.

The trial was established with three replicates of each treatment. Fourteen different combinations of stand density and targeted pruning height were investigated (Table 1). The plot size was variable: treatments with wider spacing had larger plots to accommodate an adequate number of stems. The trial initially included an additional two treatments with a target pruning height of 7 meters but these plots were excluded from this analysis because their grafts grew and developed much more slowly than those of the other plots. It is not clear why this happened, but it means that comparisons between the results for these treatments and the others may not be particularly informative for any of the studied variables.

All plots featured a central subplot containing the same 8 clones but the treatments had different number of replicates of each clone due to variation in the plots’ sizes. The clones’ ramets were randomized in each plot. All measurements were acquired within these central subplots. The central subplots were surrounded by a row of grafts in which 18 different clones were represented. The surrounding grafts were treated in the same way as those in the corresponding central subplot.

The same soil and vegetation treatments were applied to all plots throughout the experiment. The growth of grass in the plots was controlled and the trees were protected against pine weevil, moles and roe deer. The plots were fertilized with 200 grams of 11-5-18 NPK fertilizer per graft at seed orchard age 5.

For treatments with target graft heights of 3 metres (E, G, I), pruning began at seed orchard age 5 and focused on grafts with heights of 2 meters or more. The top was pruned just above the first branch whorl above 2 metres. In addition, the leading shoots on the branches were pruned. In subsequent years, the grafts’ heights were allowed to increase by 20 cm annually until they reached the target height of 3 meters. Thereafter the grafts were pruned annually, allowing their heights to increase by 5–10 cm per year.

Graft height was measured annually in the autumn just before pruning on all grafts between seed orchard age 6 and 21 except at age 15. The height was defined as the distance between the top of the highest shoot and the ground.

Pollen production was recorded annually for all grafts from seed orchard age 9 as a binary variable (i.e. pollen production observed or not observed). From seed orchard age 12 the amount of pollen on a subset of grafts was estimated using the method of Eriksson and Jansson (1987). This method involves selecting three branches per graft, counting how many pollen clusters they bear, and measuring the average cluster length. The graft’s total number of branches is then counted and used to estimate its total pollen cluster length. The pollen mass per graft is estimated as the product of the total length of the pollen clusters and a constant representing the pollen mass of 1 cm clusters of strobili as reported by Koski (1975). In each plot, one graft of each clone was sampled for this purpose. The pollen production per hectare was calculated as the product of the estimated value per graft and the treatment’s planned stand density.

Cone production was measured annually on all grafts from seed orchard age 6 to age 21. The volume of the cones and the total number of cones produced by each graft was recorded. Cone production per hectare was calculated by multiplying the estimated value per graft by the treatment’s planned stand density.

Statistical analyses of height development and the production of cones and pollen were performed using the Proc Mixed module of SAS (version 9.4) based on the following model:

For the seed quality traits, the Proc Mixed module of SAS was used with the following model because only plot-level data were available:

For both models (Eq.1 and Eq. 2), an autoregressive spatial covariance structure on residuals was used to account for the dependence between repeated measurements,

stands for the variance of an observation, ρ for the correlation between adjacent observations on the same subject, and w for the time interval between two measurements. Tukey-Kramer adjusted significance levels were used for multiple comparisons.

Pruning increased the differences in graft height between treatments with different target heights. By orchard age 12, all treatments had reached heights that necessitated pruning (Fig. 1). 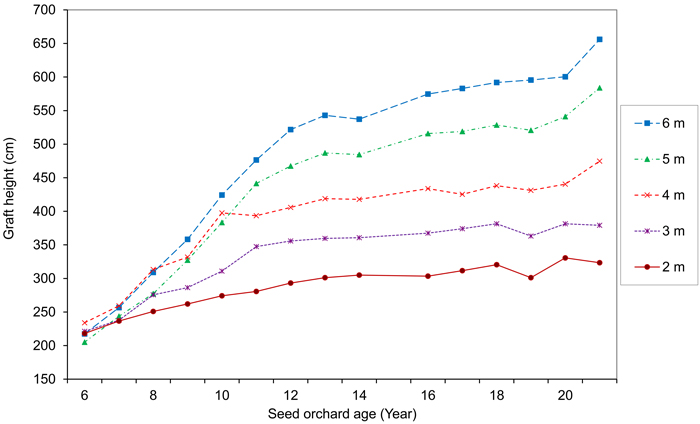 Fig. 1. Graft height before pruning in the autumn each year for treatments with different target heights.

Pollen production started simultaneously in all treatments (Table 2). By orchard age 12, more than 80 percent of the grafts in the experiment were producing pollen (data not shown).

Cone size varied between years and treatments (Fig. 2) but tended to increase over time. In particular, cones from early crops were appreciably smaller than those from later crops. 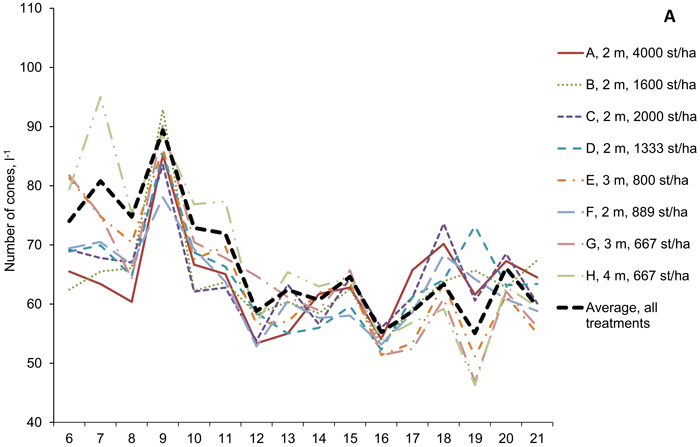 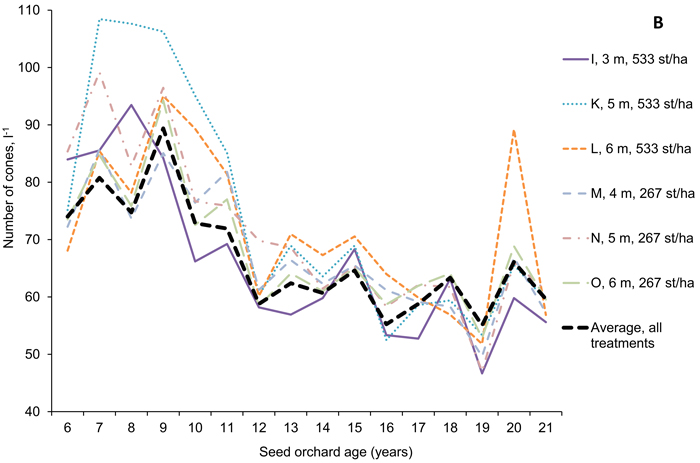 Fig. 2. Cone size, measured as number of cones per litre, from seed orchard age 6 to 21. In A: treatment A–H. In B: treatment I–O. Average for all treatments in both A and B.

In treatments with high stand densities, cone production increased faster than in those with wider spacing. However, over the entire study period (up to age 21), combinations with wide spacings and high target heights had the greatest total cone production (Table 3).

There was a significant effect on seed mass of treatment and of the interaction between treatment and year (p < 0.0001 for both). 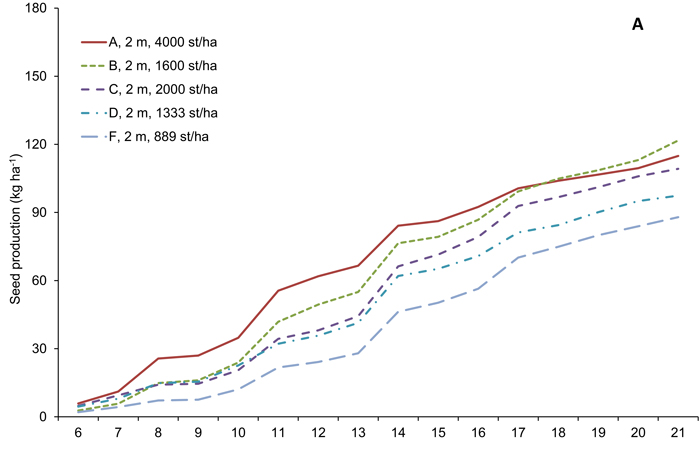 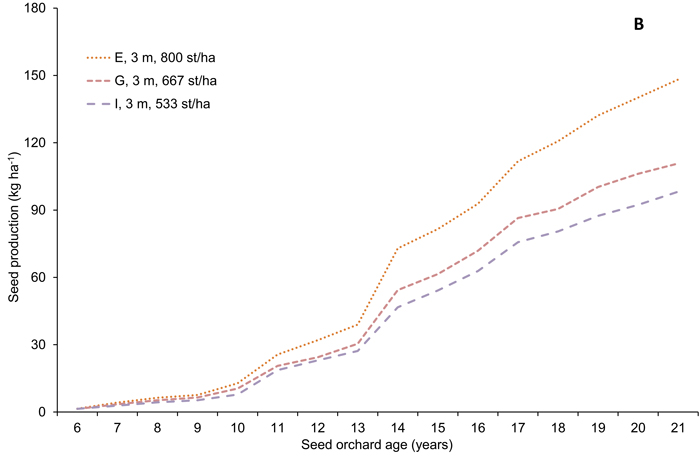 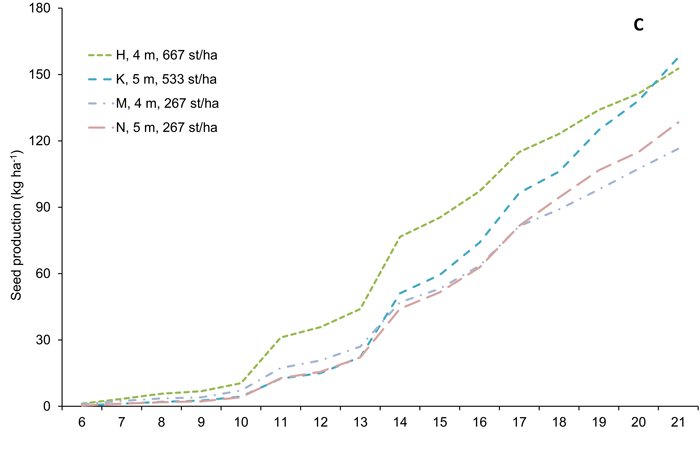 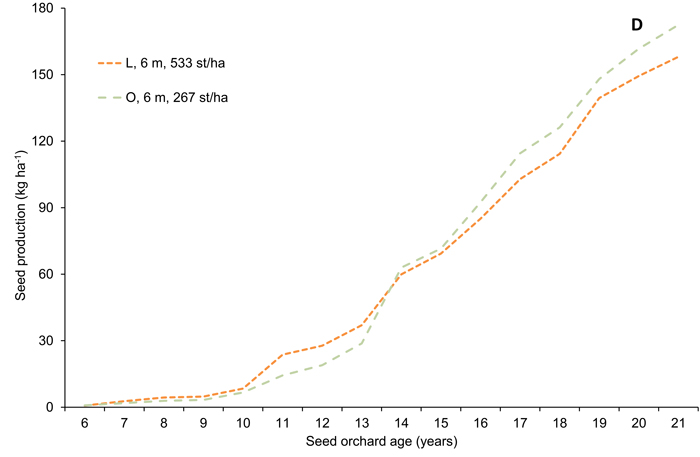 Fig. 3b. Cumulative seed production per hectare from seed orchard age 6 to 21 (kg ha–1) in treatments with C: target heights of 4 and 5 metres, and D: target height of 6 metres.

The statistical analyses showed that the clones differ with respect to all of the studied cone and pollen variables, with variance components ranging from 9 to 54 percent of the total random variation. The clones were expected to differ with respect to important traits, so efforts were made to ensure an even balance of clones between treatments when the experiment was established.

There were large differences between years for most of the studied treatments, and also rank changes between treatments between years; both of these trends are reflected in the significant observed interactions between treatment and year. The treatment by year interactions also explain the non-significant treatment effects for most variables: the interaction terms captured most of the treatment differences. However, by considering the cumulative effects of the different treatments over multiple years, it was possible to draw conclusions relevant to seed orchard management.

The differences between treatments with different target heights increased over time, as expected. The height development data showed that it was possible to manage trees’ height growth so as to ensure that they reached their target heights and then grew by only 5 to 10 cm per year thereafter (note that Fig. 1 shows the height before pruning in autumn each year). This demonstrates that there are no biological constraints that require seed orchard managers to plan for target heights of more than two meters for at least the first 21 years of the orchard’s life.

The cones produced by the grafts were smaller during the first few crop years, i.e. up to seed orchard age 11. The largest cones during these first coning years were produced in treatments with low target heights and high stand densities. From age 12 and onwards, the cone size stabilised at around 60 cones per litre and there was relatively little year-to-year variation. The cone sizes observed in this work are consistent with those reported for previous studies conducted in Swedish P. sylvestris seed orchards (Almqvist et al. 1995; Almqvist et al. 1996; Almqvist 1998; Eriksson et al. 1998).

The number of filled seeds varied between years, but the within-year variation between treatments was small. Similar patterns were observed for seed weights but with a somewhat greater variation between treatments within the same year. In addition, seed weights tended to be lower during the first 4 production years (seed orchard ages 6–9). The numbers of filled seeds and seed weights were within the limits of normal variation for seed orchard seeds of P. sylvestris (Almqvist et al. 1995; Almqvist et al. 1996; Almqvist 1998; Eriksson et al. 1998). All of the tested treatments were thus capable of producing high quality seed.

The following conclusions can be drawn from the results of this study:

The trial was planned and established by Lars Wilhelmsson and Urban Eriksson. The skilful work of the staff at the Brunsberg Skogforsk field station in establishing and managing the seed orchard and performing the assessments is gratefully acknowledged. Sees-editing Ltd. improved the language.