Long-term response to thinning in a beech (Fagus sylvatica L.) coppice stand under conversion to high forest in Central Italy

European beech (Fagus sylvatica L.) forests have a long history of coppicing, but the majority of formerly managed coppices are currently under conversion to high forest. The long time required to achieve conversion requires a long-term perspective to fully understand the implication of the applied conversion practices. In this study, we showed results from a long-term (1992–2014) case-study comparing two management options (natural evolution and periodic thinning) in a beech coppice in conversion to high forest. Leaf area index, litter production, radiation transmittance and growth efficiency taken as relevant stand descriptors, were estimated using both direct and indirect optical methods. Overall, results indicated that beech coppice showed positive and prompt responses to active conversion practices based on periodic medium-heavy thinning. A growth efficiency index showed that tree growth increased as the cutting intensity increased. Results from the case study supported the effectiveness of active conversion management from an economic (timber harvesting) and ecological (higher growth efficiency) point of view.

Beech (Fagus sylvatica L.) is an economically and ecologically important tree species in Europe (Bolte et al. 2007), where it covers about 15 million hectares (FOREST EUROPE, UNECE and FAO 2011). Although the species occurs from the plains to about 1800 meters above sea level throughout its European range, its distribution prevails in mountain areas of Central and Southern Europe. The cultivation of beech forest has represented a fundamental resource for people living in mountain areas where human practices have significantly modified the distribution, composition and structure of beech forests (Brunet et al. 2010; Nocentini 2009; Scarascia-Mugnozza et al. 2000). In particular, most beech forests in Southern Europe had a long history of coppicing, a situation very common in Italian beech forests. Economic and social changes in the last decades have supported widespread conversion of many coppices into high forests, a situation very common in many European countries (Cañellas et al. 2004; Chianucci et al. 2015b; Cutini et al. 2013; Di Matteo et al. 2010). At present time, stored coppices (i.e., stands left growing beyond the customary coppice rotation) represent 89% of the whole coppice area in Italy, and managed coppices in transition to high forest occupy about 150 000 ha (NFI 2005).

Currently, the management situation of beech forests in Italy is quite diversified. While high beech forests prevail in Southern Italy and in the Alps, most beech stands originated from coppicing are mainly located in Northern and Central Apennines (61%). On one hand, conversion has usually been carried out by gradually thinning the stand; this option has commonly been adopted in public areas (Ciancio et al. 2006). On the other hand, conversion to high forest has not been so widespread in private forests and there are large areas where coppices have been abandoned (Nocentini 2009). The co-existence of large areas (roughly 500 000 ha) either abandoned or under active conversion raises several questions concerning present and future management perspectives for beech coppice woods.

Whatever the management, the ecological implications of coppice conversion is still poorly documented. As the conversion in mountain area is a long process, a long-term perspective is required to define appropriate management options to fulfil conversion targets. Furthermore, analysing the effects of different management options in an objective and reproducible way is usually challenging, because different methodologies and sampling strategies have been proposed, severely hampering comparisons among studies (Franklin et al. 2002). This calls for an evaluation of the different management options using objective methods and techniques. This study is a part of a wider long-term project focusing on designing different silvicultural options for managing pure beech stands (Cutini et al. 2015, but see also the LIFE14 ENV/IT/000514 project: www.futureforcoppices.eu). Specifically, in the present study we investigated the effects of two silvicultural alternatives (natural evolution and active conversion) in a former coppice stand, which was monitored during a 23 years period. The analysis included canopy attributes and growth efficiency measured from well-established forestry techniques. Finally, we interpreted the results based on an integrated approach to outline guidelines for managing beech forests originating from coppice.

The study was conducted in a mountainous area of the Northern Apennines, Italy (Alpe di Catenaia; 43°49´N, 11°49´E). The experimental trial consists of two permanent pure beech plots established in a previous study (Amorini et al. 2010) in 1972, including the natural evolution pattern (unthinned control) and the traditional conversion system (periodic thinning). The plots were 1 ha in size each and were chosen within a uniformly managed coppice stand aged 27, i.e. at a time around the traditional rotation. Four inventories were carried out in both plots since 1972 at each decade up to 2012 (Table 1). The original experimental design included replicates for assessing growth dynamics and mortality in the different management options (see Amorini et al. 2010). However, to get a compromise between long-term monitoring of the effect of the silvicultural alternatives on beech and the annual survey of a number of canopy attributes (see 2.2), we were forced to not consider replicates in the current experiment.

According to the classical French tradition (Hubert 1983), active conversion practices consist in gradually reducing the number of shoots by means of periodic low thinning, with the first thinning applied close to the end of the coppice rotation. The interval between two consecutive thinning procedures was 15–20 years, with a temporary opening of the canopy cover, to enable seed regeneration under gradually decreasing cover. Regeneration cutting conclude this conversion system, which can last up to 150 years, (Hahn and Fanta 2001). In our stands, three medium-heavy thinnings were done in 1972, 1987 and September 2002 in the thinned plot. Based on definition of optimal target stand density (Ciancio et al. 2006), the adopted thinning reduced the number of stools and the basal area to values ranging from 41% to 70% and from 29% to 44%, respectively (see Table 1).

The following canopy attributes have been estimated in the study plots using various methods: litter production and its partitioning, leaf area index and canopy transmittance ; we used pseudo-replicates to calculate these attributes at plot level. Growth efficiency was also calculated in each plot.

Litter production was estimated using litter traps following the protocol by Chianucci and Cutini (2013). Nine 0.25 m2 traps were placed on a grid within each plot at a height of 1 m. Litter was collected during 1992–2014; the collection was conducted every year at intervals of 10–15 days during October–January. Litter was grouped into leaves, woody and reproductive parts; and dried at 85°±2 for 24 hours in the laboratory using forced air stoves. The necromass values (Mg ha−1) of each litter component were determined using digital scale with ±1 g precision.

Leaf area index estimates were performed every year during 1999–2014 in July–August under diffuse and uniform sky conditions, using a Plant Canopy Analyzer LAI-2000 PCA (Li-Cor Inc., Lincoln, USA), equipped with a 90° azimuth view cap. The optics of PCA consist of a fisheye lens (148° field ofview) divided into five concentric rings (with central zenith angle of 7°, 23°, 38°, 53°, and 68°, respectively). Each ring simultaneously integrates incoming radiation in the 320–490 nm wavelength range (blue light) over the view cap azimuth range selected. One above-canopy reference measurement for each plot was recorded in clearings near each study area. Nine below-canopy measurements were recorded within each plot at the same grid points used for litter collection. Leaf area estimates were calculated from a radiative formula. We omitted the largest zenith angle (LAI4) to reduce woody contribution on below-canopy measurements

Canopy direct transmittance was measured every year during 1992–2014 in July–August at noon under clear sky conditions with an AccuPAR ceptometer (Decagon Devices, Pullman, USA). The instrument consists of an integrated microprocessor-driven data logger and probe. The probe contains 80 independent sensors, spaced 1 cm apart. The photosensors measure PAR (Photosynthetically Active Radiation) in the 400–700 nm waveband (µmol m−2s−1). One above-canopy measurement for each plot was recorded in clearings near each study area. Nine below-canopy measurements were done within each plot at the same grid points used for litter collection. Four measurements per sampling point were recorded, for a total of 36 measurements (2880 PAR readings) per plot. We calculated the transmittance (Trasm) as the percentage between the annual averaged below light measurement to the above radiation measured in each plot.

Growth efficiency (ω) was calculated as

The impact of the two management options on canopy attributes was evaluated using linear mixed effects (LME) model, with year as a random effect and silvicultural option as a fixed effect. Statistical analyses were performed in R version 3.03 (R Development Core Team 2013) with the ‘lmerTest’ library uploaded.

Table 2 illustrates average values obtained from the canopy variables in the natural evolution and thinned plots. With regard to litter production, leaves represented the major litterfall component, comprising 77% and 72% of total litter in thinned and unthinned plots, respectively. Woody elements formed the second most important component, 13% and 16% of litterfall of thinned and unthinned plots, respectively. Reproductive parts contributed approximately 9–10% of total litter in both plots. Non-classified elements were 1–2% of the total litter. 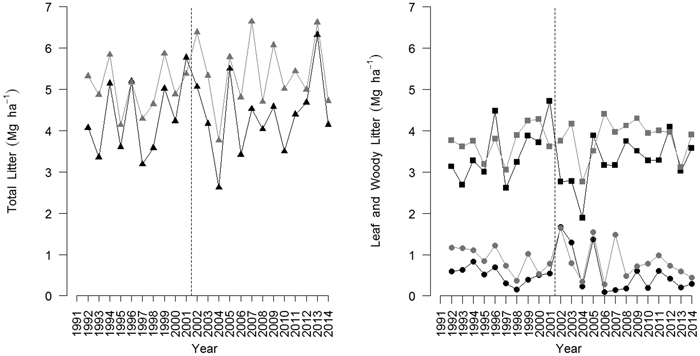 Consistently with litter removal, thinning reduced LAI4 from 5.66 m2 m−2 in 2002 to 4.13 m2 m−2 in the subsequent year (Fig. 2). LAI4 in the thinned stand was significantly lower than that in the unthinned stand (LME, p < 0.05), even though the differences appeared to plateau rapidly over time. 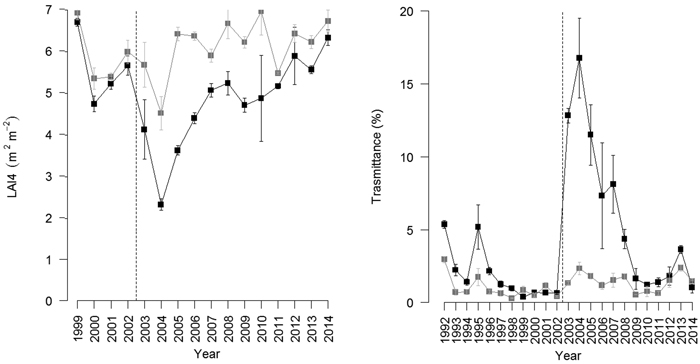 In this study we compared the implication of two alternative management options in beech coppice over more than two decades. All statistical tests indicated that the surveyed variables are influenced by the silvicultural treatments in the long-term, supporting the reliability of the monitored variables to assess the beech response to the silvicultural interventions (Salvati and Zitti 2009). In addition, the sampling protocol was comparable with that adopted in previous studies (e.g. Genet et al. 2010; Lebret et al. 2001; Leuschner et al. 2006; Meier and Leuschner 2008), allowing thorough evaluation of the different conversion options in beech forests. It should, however, be stressed that our study was limited to a cause-study level. Even if we judged the canopy properties estimates obtained herein as reliable average values for beech, on account of the relatively large time series obtained, the lack of replicates implies that generalisation of the outcome should be carefully evaluated.

The analyses presented here indicated the high productivity of the stands investigated, as outlined by the average values of litterfall and LAI4, which are comparable with previous reports (Cutini 2002; Lebourgeois et al. 2005; Matteucci et al. 1999; Meier and Leuschner 2008; Chianucci et al. 2015a; Chianucci 2016). This result is important because medium-high stand productivity is a pre-requisite for achieving successful conversion management.

Leaves represented the main litter component in both plots. Accordingly, leaf litter and its related attributes such as LAI4 and Trasm were significantly affected by the two management options, even though the differences between the two plots were the highest in the years immediately after thinning and appeared to level out with time, indicating the prompt response of beech to intensive thinning cycles, as observed for other broadleaves (Rodriguez-Calcerrada et al. 2011). The growth efficiency indexes further confirmed that thinning increased the growth performance, most likely due to the reduction in competition for light and the subsequent recovery of available space (Cescatti and Piutti 1998; Van der Maaten 2013).

Francesco Chianucci and Luca Salvati designed the experiment, coordinated the research and wrote the paper; other co-authors provide conceptual, field data collection and logistic support. We are grateful to the late Germano Gambi, Emilio Amorini and Gianfranco Fabbio for setting up the experimental sites. We are grateful to collaborators and technicians of Forestry Research Centre who contributed to data collection. The authors also wish to thank the anonymous reviewers for their helpful suggestions.

FOREST EUROPE, UNECE and FAO (2011). State of the Europe’s Forests 2011. Status and trends in sustainable forest management in Europe. 341 p.