Common walnut is an important tree species in Croatia, mainly due to its fruit production. It was planted as individual trees or in small groups in backyards and fruit orchards. Besides planting of the common walnut that grow in Croatia for the centuries, many varieties were imported from neighboring countries, especially after the First World War (Mrva 1995). Although several review articles on PCR multiplex development already exist for forest and agriculture trees (Guichoux et al. 2011), this method is not commonly used for common walnut. Moreover, the genetic variability of Croatian common walnut populations using molecular genetic markers has not been studied so far. The goal of the present study was to set up multiplex PCRs with microsatellite primers to obtain faster and cost effective data for studying the genetic diversity of common walnut populations from Croatia.

The samples for DNA extraction were fresh leaves collected from 15 mature common walnut trees of about 25–50 years old. These trees were grown in the municipality of Jastrebarsko (45°40´N, 15°39´E), in Croatia and were planted as urban, ornamental trees. The DNA was extracted according to the protocol of Doyle and Doyle (1987) with the following modifications: hexadecyltrimethylammonium bromide (CTAB) extraction buffer contained 2% polvinylpyrrolidone (PVP). The quality and quantity of isolated DNA was checked on 0.8% agarose gel (Sigma, Germany) using a DNA Ladder (Lambda DNA/HindIII Fragments; Invitrogen, Germany). The DNA concentration was measured fluorometrically (Quantus Fluorimeter, Promega, USA) and ranged from 20.4 to 224.0 ng µl–1.

The mostly used SSR markers for genotyping of cultivar and population structure of Juglandaceae were chosen from the literature to study the population structure of common walnut from Croatia. The primer parameters for chosen WGA loci were described in Table 1. SSR loci were amplified in a single PCR reaction with a total volume of 10 µL and in a multiplex PCR reaction with a total volume of 20 µL. The PCR reactions were performed in a PTC-100 Thermal Cycler (MJ Research, Waltham, MA, USA) using fluorescent labelled primers (fluorescent dyes: 6-FAM, VIC, NED, and PET; Applied Biosystems, Life Technologies GmbH). The PCR mixtures contained the following components: 1x PCR buffer, 200 mM each dNTP, 1 U Taq DNA polymerase (TAKARA Co. Ltd, Tokio, Japan), and 1–2 ng template DNA and primers. The primer concentration varied between 0.1 µM and 0.4 µM. The PCR program started with initial denaturation at 95 °C for 5 min, followed by 30 cycles of 94 °C for 30 s, 58 °C for 1 min and 72 °C for 40 s and a final elongation step at 72 °C for 2 min.

We tested twenty one previously labeled SSR markers (Table 1) for specificity and sensitivity in single PCRs. The nineteen of them gave positive and repeatable results for all fifteen analyzed samples in the expected size range, except WGA 005 and WGA 032 which produced multilevel pattern (Table 1). The PCR products generated with SSR genotyping produced both homozygote and heterozygote peaks (Fig. 1), which is in accordance to diploid level of common walnut. Our goal was to combine as many SSR markers as possible in one multiplex PCR. Based on single PCR data, we excluded those SSR markers from multiplexing which produce overlapping loci labelled with the same dye (WGA 071, WGA 276, WGA 202, and WGA 027) and excessive stutter bands (WGA 376). The remaining fourteen SSR markers were considered as candidates for the multiplex PCR. Further, we performed the multiplex PCR according to the protocol in the literature (Henegariu et al. 1997) using two different equimolar concentrations of primers: 0.4 µM and 0.15 µM. In contrast to the higher molar concentration (0.4 µM), the lower primer concentrations (0.15 µM) made the peak assignment and the data analysis easier in the multiplex PCR. However, WGA 225, WGA 321, and WGA 331 showed lack of amplification in multiplex PCRs. To achieve even peak heights and peak height balance in multiplex PCR, we empirically optimized the individual primer concentration of eleven SSR markers which varied between 0.1–0.3 µM (Table 1). The remaining eight SSR markers which were excluded from the multiplex PCR were possible to be combined into two smaller multiplex PCRs: one five-primer-set (WGA 027, WGA 225, WGA 276, WGA 331, and WGA 321) and one three-primer-set (WGA 071, WGA 202, and WGA 376) (data not shown). 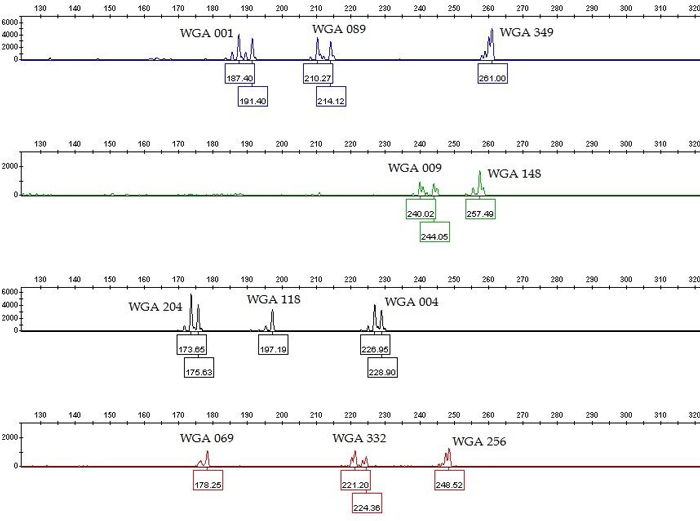 A summary of gene diversity parameters of 15 common walnut samples at each of eleven analyzed loci is presented in Table 2. Genetic diversity was moderate for most of the investigated loci. In total, 42 alleles were found. All markers were polymorphic with a maximum number of alleles Na = 7 (WGA 069) and a minimum Na = 2 (WGA 004 and WGA 204) with an average value of 3.818. Markers WGA 001, WGA 069 and WGA 148 showed excess of homozygotes. Observed heterozygosity ranged from 0.067 to 0.667 with an average of 0.473. Fixation index (FIS) indicated excess of heterozygosity in five loci (ranged from –0.034 to –0.132) and a deficiency of heterozygotes in six loci (ranged from 0.016 to 0.668). Only three of them indicated significant departure from Hardy-Weinberg equilibrium.

Multiplex PCR enables quick and cost effective amplification of samples with more than one primer pair in one reaction (Edward and Gibbs 1994). Theoretically, the number of primer pairs in single multiplex mix is limited by the number and range of fragment size (Culley et al. 2013). In our work, twenty one SSR markers previously used to study the genetic diversity of populations and cultivars of common walnut (Dangel et al. 2005; Ross-Davis et al. 2008; Woeste et al. 2002) were used for genotyping of 15 samples of common walnut from Croatia. We showed that the highest number of SSR markers combinable in one multiplex PCR was eleven primer pairs. The remaining eight SSR markers were possible to be combined in two multiplex PCRs, with five and three SSR markers, respectively. Also, three SSR markers did not amplify in multiplex PCR, probably because of competition between primers (Butler 2005b; Henegariu et al. 1997). The limiting factor for choosing the candidate primer pairs for multiplex PCR was labelling of primers with the available fluorescent dyes for genotyping with ABI PRISM® 3100-Avant Genetic Analyzer. Particularly, for multiplex formation, we gave special attention to avoid overlapping of size ranges of the fragments labelled with the same fluorescent dye. With the optimization of primer concentrations, we achieved peak height balance at heterozygous SSR loci. The developed multiplex panel could be enlarged by modifying of the cycling conditions, the thoughtfully fluorescent labelling of SSR markers and broadening of the tested size range.

Information of genetic diversity and population structure are important to understand long term variability and adaptability of populations (Rajora et al. 2001). The study of molecular diversity of common walnut is essential in the preservation of its genetic resources. The common walnut is species that predominantly growth in human settlement, so its selection and distribution is directly affected by humans. Traditionally managed common walnut populations may serve as reservoir for genetic variation (Gun et al. 2010). Analyses of fifteen samples of Croatian walnut population from small geographic area showed moderate polymorphic level and genetic diversity. The observed average number of alleles per locus is highly dependent on sample size. Accordingly, the average number of alleles of Croatian samples was lower compared with those in literature in which more individual trees were studied but the average number of effective alleles was consistent with the published data (Pollegioni et al. 2009; Pollegioni et al. 2011; Ruiz-Garcia et al. 2011). The investigation of Croatian walnut population, which is small but complex population considering the mixing of different genotypes over the centuries, will provide insight into effects of traditional management on its population genetics.

Funding was provided by Ministry of Science, Education and Sports of the Republic of Croatia. to research project Tree breeding and forest seed science (024-0242108-2099) and by Croatian forest L.t.d. to research project Genetic variability of Families of Common Walnut.