The alternate host range of cherry-spruce rust is poorly studied although such information could be important in protecting spruce seed orchards from infections. Pathogenicity of cherry-spruce rust, Thekopsora areolata (Fr.) Magnus, was investigated on potential alternate host species in a greenhouse and in a laboratory in Finland. Five common species of Ericaceae, Vaccinium myrtillus L., V. uliginosum L., V. vitis-idaea L., Empetrum nigrum L. and Arctostaphylos uva-ursi (L.) Spreng, were inoculated in the greenhouse using aeciospores from seven Norway spruce [Picea abies (L.) H. Karst.] seed orchards suffering from T. areolata in 2018. In addition, young detached leaves of Vaccinium spp. and 17 other plant species of ground vegetation from eight Norway spruce seed orchards were inoculated with aeciospores from six seed orchards in the laboratory in 2019. Also, young leaves of Prunus padus L. trees growing within the seed orchards or close to them were inoculated as controls. None of the inoculated leaves of the potential alternate hosts formed uredinia either in the greenhouse or in the laboratory. In contrast, leaves of P. padus from the seed orchards were infected by the six spore sources from six seed orchards and produced uredinia. As T. areolata spores were able to infect only P. padus, but not the other tested species belonging to ground flora, it was concluded that T. areolata disperses only via Prunus spp. in Finnish seed orchards.

The rust genus Thekopsora includes 13 species pathogenic to tree genera Picea, Abies and Tsuga, and may spread via many plant species belonging to families Rosaceae, Ericaceae, Rubiaceae, Asteraceae, Hydrangeaceae and Boraginaceae (Gäumann 1959). Thekopsora areolata (Fr.) Magnus is a serious heteroecious pathogen of cones of Picea in Europe and Asia (Gäumann 1959; Kaitera et al. 2017), and spreads via Prunus (Gäumann 1959; Kaitera et al. 2014, 2019). The rust destroys seeds causing great economical losses especially in Norway spruce [Picea abies (L.) H. Karst.] seed orchards specialized to produce high quality seeds. This is mainly due to irregular flowering of Picea that results in mast year cone crops only a few times per decade (Himanen 2016). Severe rust damage in such years have been reported in 1989, 2000 and 2006 (Nikula and Jalkanen 1990; Savonen 2001; Kaitera 2013). The rust may cause a 10-fold reduction in seed germination (Kaitera and Tillman-Sutela 2014).

Thekopsora areolata has a complicated lifecycle with five different spore stages. Three stages, uredinia, telia and basidia, occur in alternate hosts, while spermogonia and aecia occur in Picea cones (Gäumann 1959; Kaitera et al. 2009). Control of T. areolata is currently difficult, because the mode of spreading of the rust is poorly understood. The rust infects also Picea shoots, where it may sporulate (Roll-Hansen 1947) or occur as a latent pathogen (Hietala et al. 2008). It is unclear, if the disease control should be focused on alternate host eradication, cutting aecial sporulation on Picea, reducing insect incidence in cones or protection of cone infection by fungisides or bioproducts. One possible cause for the effective spreading of the rust even in seed orchards that lack Prunus might be the existence of other susceptible alternate hosts capable of spreading the rust. Other species than Prunus may also be involved in rust epidemics in remote areas far from Prunus trees like in northern Finland in 1989 (Nikula and Jalkanen 1990). The susceptibility of other species as alternate hosts could, but have not been, investigated by inoculations of potential plant species under control conditions.

This study was part of a MESIKE project (https://www.luke.fi/wp-content/uploads/2018/11/Yleisesittely.pdf), in which factors affecting T. areolata epidemics and management practices to reduce rust damages were investigated in Finnish Norway spruce seed orchards in 2018–2019. The aim of this study was to test whether plant species common in Norway spruce seed orchards in Finland could serve as alternate hosts to T. areolata.

Nine seed orchards that had suffered from T. areolata in the 2000s were selected for the investigation based on previous cone rust studies after excellent cone crops in southern Finland in 2000 and 2006 (Savonen 2001; Kaitera 2013), and also on recent information of rusts from researchers and seed orchards’ personnel in southern Finland (Fig. 1). The seed orchards were mainly established on forest land in the 1960–70s (Nikkanen et al. 1999) or on agricultural field in 1990s. Prunus trees occurred in five seed orchards, and four seed orchards lacked this alternate host, and the closest Prunus-plants located in a distance of 2–3 km. 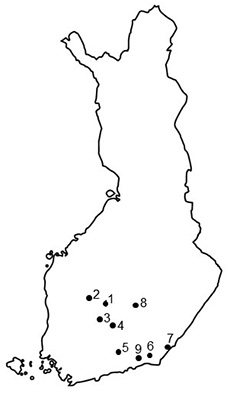 2.3 Inoculation of the test plants in the greenhouse

Young seedlings from a local nursery (Peuraniemi nursery, Kajaani) were delivered to greenhouse of the Botanical Gardens (University of Oulu) in early May 2018. In late May, pots of seedlings were transported to a glass house. The tested species of Ericaceae were Vaccinium myrtillus L., Vaccinium vitis-idaea L., Vaccinium uliginosum L., Empetrum nigrum L. and Arctostaphylos uva-ursi (L.) Spreng. In addition, two Prunus padus L. seedlings were prepared as controls.

First, the species of Ericaceae were moistened with a water-sprayer after which aeciospores were dusted on lower leaf surface of the plants with a paintbrush. Then the plants (Fig. 2) were covered with a moistened plastic bag for 48 h. Three plants of each species were inoculated using ten spore sources and one plant of each species was inoculated with nine additional spore sources (Table 1). Therefore, a total of 19 spore sources were used to inoculate 39 plants of each of the test species in 2018. One plant of each species was sprayed only with water without inoculation as control. In addition, two Prunus seedlings were inoculated and incubated similarly using two spore sources in a separate study published earlier but performed along this study (Kaitera et al. 2019). 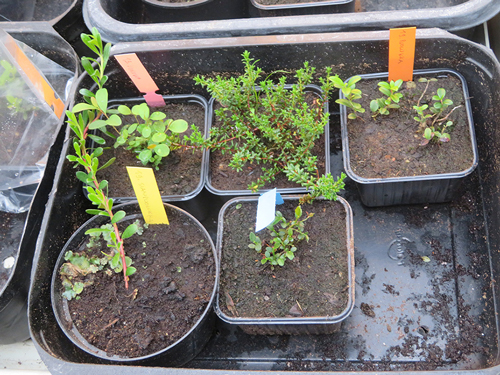 2.4 Inoculation of test plants in the laboratory

Young, healthy leaves of plant species belonging to ground flora (Table 1) were collected from eight Norway spruce seed orchards in May-June 2019. Leaves of 17 species were collected each from one seed orchard, Vaccinium myrtillus was collected from three seed orchards, V. vitis-idaea was collected from five seed orchards and Prunus padus was collected from ten trees in seven seed orchards. The leaves were stored in a refrigerator at 5 °C prior to inoculations. The six spore sources were dusted on leaves laid on Petri dishes with water (two leaves per plate, two plates per plant species). One uninoculated plate (two leaves per plate) of each species and origin was used as control. Formation of T. areolata uredinia on the leaves was recorded after 2- and 4-weeks of incubation using a stereo microscope, with abundancy classes “no uredinia”, “scarce uredinia” and “abundant uredinia”. Uredinia were compared to reference uredinia developed on Prunus in previous inoculation experiments (Kaitera et al. 2019), if uredinia developed on other test species than Prunus.

2.5 Genetic analysis of the spores

One aeciospore source from each of the rust populations from the seven seed orchards were dusted in Eppendorf vials in mid-June 2018. In addition, urediniospores produced on the control Prunus seedlings were dusted similarly in Eppendorf vials. Fungal DNA was extracted from homogenized aeciospores, and ITS2-sequence amplified, as described previously (Kaitera et al. 2019). The PCR products were sequenced and compared with sequences in GenBank using Blast search. All of the seven aeciospore sources from seven seed orchards in 2018 (accession numbers MK894117-MK894123) and resultant urediniospores on Prunus (MK894124-MK894126) were identified as Thekopsora areolata in a separate study (Kaitera et al. 2019). Aeciospores from the same rust populations collected in 2019 were not identified.

Frequencies of uredinia were compared between the spore sources using the chi-square test of the FREQ procedure of SAS software (SAS Institute Inc, version 9.4). Due to low frequencies in class “abundant uredinia”, the classes “scarce uredinia” and “abundant uredinia” were pooled in statistical analysis.

3.1 Rust sporulation on test plants in the greenhouse

In 2018, none of the inoculated species of Ericaceae, V. myrtillus, V. vitis-idaea, V. uliginosum, E. nigrum or A. uva-ursi, showed rust symptoms or sporulation, and no uredinia of T. areolata developed on inoculated leaves of the 19 spore sources used. None of the overwintered inoculated leaves of V. myrtillus (482 leaves), V. uliginosum (1290), V. vitis-idaea (313) or A. uva-ursi (145) carried uredinia or telia in May 2019. Neither did the uninoculated control leaves carry uredinia or telia.

3.2 Rust sporulation on detached leaves of test plants in the laboratory 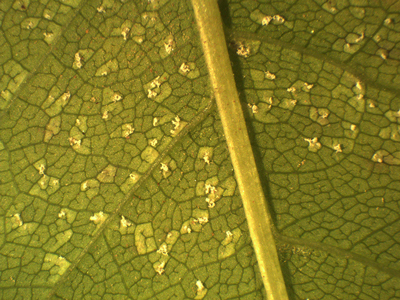 In this study, all spore sources produced uredinia in the laboratory on Prunus leaves collected from the seed orchards. This indicated (i) that spores from T. areolata populations from all Finnish seed orchards were pathogenic on Prunus, and that (ii) all natural Prunus trees growing in the seed orchards or next to them were widely susceptible to Finnish T. areolata populations. These inoculation results on natural plants accord with the recent results of pathogenicity tests on Prunus spp. (Kaitera et al. 2019), when spores from various Finnish rust populations infected several commercial P. padus origins and exotic Prunus species in the laboratory. The present inoculation results also confirmed the heteroecious nature of the Finnish T. areolata supporting the previous observation that no autoecism occurs among populations of T. areolata (Kaitera et al. 2019). This was confirmed by using spores both from seed orchards that contain Prunus and seed orchards that lack Prunus within or next to the orchard. It also strongly suggests that in seed orchards that lack Prunus, long-distance dissemination of basidiospores takes place. The heteroecious nature of the rust has recently been confirmed also in a molecular study (Capador et al. 2020).

In this study, some variation in the abundancy of uredinia was recorded on Prunus although this variation was low. An earlier report of natural variation in T. areolata incidence on Prunus padus cultivars suggested differences in the susceptibility of Prunus to T. areolata (Kaitera et al. 2014). However, no significant differences in virulence between the spore source was observed in this study. Therefore, no sign of higher virulence of local rust sources on local Prunus leaves was observed. In the present study, none of the alive or detached leaves of the tested plants species of Ericaceae and of other plant families commonly present in the ground vegetation in Finnish Norway spruce seed orchards showed symptoms of cherry-spruce rust. On both detached and attached leaves of Prunus, uredinia of T. areolata developed systematically, which is similar to formation of Cronartium flaccidum uredinia on detached and attached leaves of Paeonia, Vincetoxicum and other susceptible alternate hosts (Kaitera et al. 2015). Therefore, it can be concluded that the tested species do not serve as alternate hosts for T. areolata, and the rust infects only Prunus spp.

In conclusion, current inoculation results suggest that only Prunus are susceptible to Finnish T. areolata. These inoculation results should still be confirmed by studying whether natural sporulation of T. areolata occurs on other potential alternate host species belonging to the ground flora in Finnish seed orchards, but we consider it unlikely. Control actions against the rust among alternate host plants should, therefore, be focused to Prunus in Finnish Norway spruce seed orchards. As long-distance dissemination of basidiospores probably takes place in seed orchards, removal of Prunus should be extended to kilometres’ distance from the orchards.

We thank the personnel of the Botanical Gardens of Oulu University for the help in preparing the test plants for the inoculations and Mr. Jouni Karhu for doing the statistical analysis. We also thank Siemen-Forelia Co, and Tapio Palvelut for the use of their seed orchards for the study. This study belonged to the MESIKE project that was financed by the Finnish Ministry of Agriculture and Forestry.

Declaration of openness of research materials and data

The research materials and data are available on request from the authors.