Adult pine weevils (Hylobius abietis (L.)) feed on the tender bark of branches and roots of mature conifer trees and on the stem bark of conifer seedlings. Their feeding on mature trees does not cause any economic damage, but their feeding on planted seedlings is so devastating that the pine weevil is considered one of the most important forest pest insects in Europe. We asked whether the pine weevil prefers seedlings over other regularly utilized food sources. This question is of particular interest because new approaches to seedling protection are based on decreasing any preference for seedlings by using less palatable plants or by enhancing their defence (by genetic selection or by methyl jasmonate treatment). In a laboratory choice experiment we tested pine weevil feeding preferences for seedlings compared with branches and roots from mature trees (separately for Norway spruce and Scots pine). Pine weevils preferred roots, but not branches, of Norway spruce over seedlings of the same species. With Scots pine there were no clear preferences, but the weevils showed a tendency to prefer roots over seedlings. These results provide support for seedling protection approaches that attempt to redirect pine feeding from planted seedlings to other food sources.

The pine weevil (Hylobius abietis (L.)) is one of the most important pest insects in European forests (Långström and Day 2004). It causes much economic damage by feeding on the bark of newly planted conifer seedlings (Eidmann 1974; Petersson and Örlander 2003; Day et al. 2004). This feeding damage was already recognized as a problem about two centuries ago by Ratzeburg (1839), who described three- to six-year old plants as the preferred food of the adult pine weevil. Although pine weevils also feed on roots and branches of mature conifer trees (Eidmann 1974; Örlander et al. 2000; Wallertz et al. 2006), economic damage is limited to their feeding on planted seedlings; a considerable amount of pine weevil research has therefore focused on their interactions with seedlings (e.g. Fedderwitz et al. 2016; Luoranen et al. 2017; Zas et al. 2017).

Nevertheless, pine weevils feed extensively on planted seedlings; which raises the question of whether seedlings are a preferred food source compared to the tissues of mature trees. This question becomes especially relevant as new seedling protection methods involve the development of better-defended seedlings by decreasing their palatability (Holopainen et al. 2009; Zas et al. 2014). For example, seedlings treated with methyl jasmonate – a naturally occurring plant hormone – are less likely to be fed on if other food sources are available (Zas et al. 2014; Fedderwitz et al. 2016). This protective effect, however, tends to disappear in a no-choice situation (Fedderwitz et al. 2016). Furthermore, the genetic variation in resistance may be explored to select the more resistant genotypes for planting (Zas et al. 2017). The efficiency of these methods is likely to be related to the difference in preference between seedlings and any alternative food resources.

In this study we investigated feeding preferences of the pine weevil with regard to different host plant tissues within species, i.e. the tender bark of branches and roots of mature trees compared to stems of seedlings. Such comparisons have not been conducted before, although feeding on seedlings and cuttings (i.e. plants propagated from stem cuttings) has been compared (Hannerz et al. 2002; Kennedy et al. 2006) and preferences among different tree species has been the subject of several studies (e.g. Leather et al. 1994; Manlove et al. 1997; Månsson and Schlyter 2004; Toivonen and Viiri 2006; Zas et al. 2011; Wallertz et al. 2014). Thus, we evaluate which of the food sources that adult pine weevils mainly use, are preferred in feeding experiments by comparing different tissues of the two most common conifers in the forests of northern Europe: Norway spruce (Picea abies (L.) Karst.) and Scots pine (Pinus sylvestris L.).

We conducted two-choice feeding tests comparing stems of seedlings with branches and roots from mature trees. Comparisons were made within each of the two included tree species, Scots pine and Norway spruce.

Sixty male and 60 female pine weevils were placed individually in Petri dishes (14 cm in diameter) containing a water tube, but no food, on the day of collection. Sexes were equally assigned to the different tested pairs of food choices and tree species. With four combinations of mature material and tree species, each combination was thus tested with 15 male and 15 female weevils. The choice tests were conducted on two consecutive days due to practical reasons. Because all weevils were placed in the petri dishes simultaneously on the day of collection, some of the weevils were presented with food after 24 hours of starving and others after 48 hours of starving. For comparison, the same number of pine weevils was presented with each food choice each day, but not between days. The food was left with the weevils for 24 hours. Experiments were conducted at room temperature (22 °C).

Each seedling was cut above the first node and divided into 4 cm lengths until the recent year’s growth was reached. Each piece was paired with a 4 cm length of either a branch or root of the same species. Within each pair the difference in diameter was kept to a minimum (paired t-test; spruce: p = 0.86, pine: p = 0.24; n = 120; Microsoft Excel 2010, Version 14.0, Microsoft Corporation, USA). The phloem thickness for each piece was determined by cutting one slice of the end with a scalpel and measuring the thickness under a binocular microscope (Wild Heerbrugg) at 50 times magnification. Both ends of each piece were wrapped with aluminium foil leaving a 2 cm long opening in between. If present, needles were removed before wrapping. 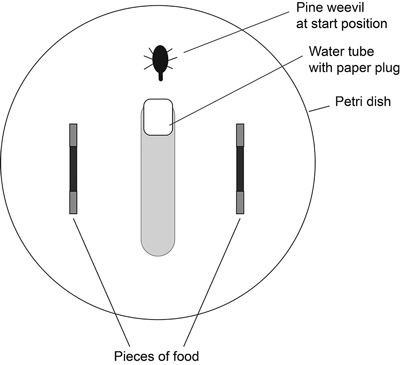 Fig. 1. Set-up of choice experiment. Two pieces of food of the same tree species (branch-seedling or root-seedling) were placed in each Petri dish. The ends of the food pieces were wrapped in aluminium foil. A water tube and one pine weevil were placed in the middle without being pointed at either piece.

The amount of material that the pine weevils consumed was calculated from the area assessed as having been eaten and the phloem thickness. Pine weevils that did not feed at all were excluded from the analysis (in total 9 weevils). The relative preference of each pine weevil for the tissues from mature trees was calculated using the difference between the two food choices divided by the total amount eaten.

For the comparisons with Norway spruce roots, Scots pine branches and Scots pine roots, the preference was assessed with a one sample t-test testing against zero, which would mean no preference (Minitab version 16.1.0; Minitab, State College, PA, USA). For comparisons with Norway spruce branches a Wilcoxon Signed Rank Test was used since the data were not normally distributed (Minitab). Mann Whitney test was used to determine if there were differences in preferences between the rounds after 24 and 48 h of starvation or between female and male weevils. Kruskal-Wallis tests (Minitab) were performed to determine if there were differences in preference between the five individual trees from which the mature tree material was collected from. 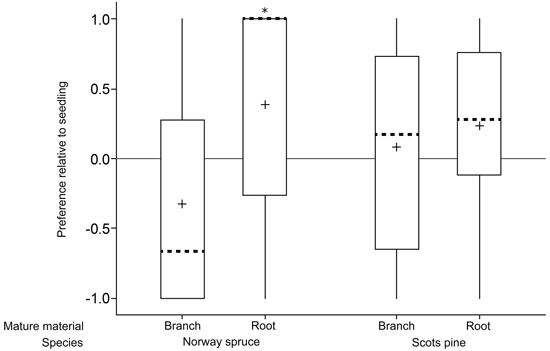 Fig. 2. Relative preferences for mature food sources (branch and root) compared to seedlings of the same species in a choice feeding test with individual pine weevils (+1 = preference for mature food source; 0 = no preference; –1 = preference for seedlings). Boxes include data from second and third percentiles with whiskers extending to the maximum/minimum data point within 1.5 box heights from the top/bottom of the box. Median line (dashed) and mean symbols (+) are shown. (* p < 0.05). 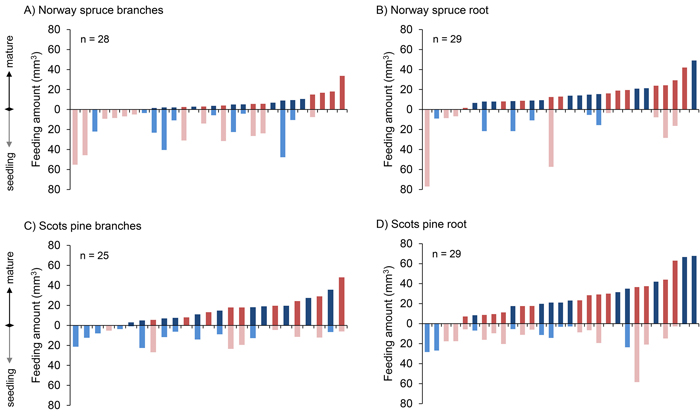 Pine weevils fed on all food sources that were offered in the two-choice tests, i.e. branches and roots from mature trees and stems of seedlings of the two conifer species. That all these food sources are utilized is in agreement with previous field data (Örlander et al. 2000; Örlander et al. 2001; Wallertz et al. 2006). Interestingly, however, seedlings were not a preferred food source. On the contrary, pine weevils had a significant preference for roots over seedlings in Norway spruce, as well as a tendency toward such a preference in Scots pine.

The preference for roots might be due to the fact that roots that are not connected to a living tree can be used by pine weevils both for feeding and egg laying. Both sexes are attracted to and feed on the same substrate that is also used for oviposition (Nordlander et al. 1997; Bylund et al. 2004). In nature, the underground position of roots may further increase the incidence of feeding, since it has been shown that pine weevils generally prefer feeding in sheltered positions, for instance in the humus below ground surface (Nordlander et al. 2005). In our choice experiment, however, all food items were cut off and presented in a Petri dish, thus separated from any influence from their natural surroundings. Consequently, the preference for roots demonstrated here provides a conservative measure of the expected preference for roots in nature.

The nutritional value, in terms of nitrogen content, is higher in seedlings than in mature trees (Wainhouse et al. 2004; Iivonen et al. 2006). Wainhouse and coworkers (2004) pointed out that, in a no-choice situation, greater feeding damage to tissues with lower nitrogen content does not necessarily reflect a preference but rather the need for increased consumption in order to maintain an equivalent nutritional intake. In a choice experiment, however, the insect would be expected to prefer the more nutritious food (seedling), and feed less on the lower quality food (branch and root). Therefore the results of our choice experiment showing more feeding on roots than on seedlings should not be interpreted as compensatory feeding. Moreover, a previous field experiment has shown that freshly cut branches placed on the ground can relieve seedlings from pine weevil feeding (Örlander et al. 2001), which indicates that cut branches are not of inferior quality as food compared to living seedlings. Thus, branches are apparently as attractive as seedlings to pine weevils, despite a higher nitrogen content in seedlings.

The results of the current study reflects the weevils´ preference for excised host materials with limited ability to trigger induced defences, i.e. in this respect similar to the fresh branches and the roots of cut trees which constitutes the main food resource for pine weevils on a clear-cut (Bylund et al. 2004). Whether these preferences between the different host materials change if pine weevils feeding tests are conducted on living tissues remains to be evaluated.

The result that seedlings were not a preferred food source provides support for new approaches to seedling protection attempting to redirect pine weevil feeding from planted seedlings to other food sources that are regularly used by the pine weevil and available in large quantities. These approaches include the selection of more resistant material in breeding programmes (Zas et al. 2017) and to enhance the defence of seedlings by methyl jasmonate treatment in the nursery (Zas et al. 2014; Fedderwitz et al. 2016; Lundborg et al. 2016a; Lundborg et al. 2016b). Thus, planting regeneration areas with less palatable seedlings should result in less damage occurring to planted seedlings; instead, feeding may be redirected to alternative food sources, such as bark of branches and roots of mature conifer trees, where no economic harm is caused. From a practical forestry point of view such approaches provide environmentally friendly methods to protect planted seedlings against one of the most important pest insects in European forests.

This study was part of the Swedish Hylobius Research Program financed by the Swedish forestry sector. It received additional funding from the Swedish Foundation for Strategic Research (Grant RBb08-003) and the Swedish research council FORMAS (Grant 942-2015-70).