Relationships between climatic variables and tree-ring width (TRW) of dominant European larch (Larix decidua Mill.) and European beech (Fagus sylvatica L.) trees growing outside of their natural distribution area in western Latvia were studied. Chronologies of TRW, which covered the periods 1949–2012 and 1911–2012, were produced for beech and larch, respectively. Common signatures in TRW between both species were observed, but their amplitude differed. Correlation analysis showed that variation of TRW of both species was affected by drought related climatic variables. Tree-ring width of beech was affected by temperature in the previous July and August and the effect of spring and autumn temperature was observed. Since the 1980s, the effect of July precipitation has become significant. Summer precipitation was significant for larch in the mid-part of the previous century; however, temperature in the previous September has become a limiting factor since 1970s. The limiting effect of winter and spring temperature apparently lost its significance around the 1950s.

Climatic changes cause shifts in distribution of tree species (Walther et al. 2002; Kullman 2008) and affect forest productivity (Lindner et al. 2010). Although warming of climate might increase productivity of boreal forests (Lindner et al. 2010), changes in forest composition are also predicted (Hickler et al. 2012). In this regard, adjustments in forest management practices are crucial to ensure sustainable forestry. One such adjustment may be the introduction of novel species, however, their ecological demands, i.e. climatic limitation of growth, should be comprehensively evaluated. Detailed information on climate-growth relationships can be obtained via dendrochronological analysis, especially for trees growing close to their natural distribution limit or outside of it (Fritts 2001; Vetaas 2002).

In Latvia, European beech (Fagus sylvatica L.) and European larch (Larix decidua Mill.) occur northwards from their natural distribution area (Bolte et al. 2007; EUFORGEN 2009) and cover 43 and 1139 ha of forestlands, respectively; both of these species are productive (Dreimanis 1995). Although warming of climate appears beneficial for growth of these species in Latvia (Hickler et al. 2012), the effect of climatic variables might still be substantial (Fritts 2001). The aim of this study was to assess the relationships between climatic variables and tree-ring width (TRW) of larch and beech in western Latvia. We hypothesized that winter-spring temperature has been limiting TRW, but that these effects have weakened during the 20th century.

European larch and European beech growing in western Latvia in even-aged plantations near Auce (56°31´N, 22°56´E, 50 m a.s.l.) and Kaleti (56°21´N, 21°29´E, 80 m a.s.l.), respectively, were studied. North-eastern Germany is considered as the area of origin for both species. Mean dimensions of the studied trees are shown in Table 1. Plantations were situated on flat terrain on fertile, well-drained clayey soils. Climate in the study areas is mild: mean annual temperature is ca.+6.1 °C, July is the warmest month with a mean temperature ca. +16 °C, and January is the coldest month with a mean temperature ca. –3.6 °C. The period when the mean daily temperature exceeds + 5 °C is ca. 185 days. Annual precipitation sum is ca. 560 and ca. 750 mm in the Auce and Kaleti sites, respectively. Most of the precipitation falls during summer. Climatic changes are reflected as an increase of temperature in the dormant period and spring, during the 20th century, mean November–April temperature has increased by 0.83 and 1.10 °C in Kaleti and Auce, respectively, and an intensification of heat and drought events (Avotniece et al. 2010).

In the studied sites, visually healthy, dominant trees, 22 larches and 9 beeches, were cored at breast height. Two samples per tree from opposite sides of stem were collected using a Pressler corer. In the laboratory, air-dried cores were fixed and gradually grinded (sandpaper roughness 100, 150, 250 and 400 grains per inch). Tree-ring width was measured using the LINTAB 5 (RinnTECH, Heidelberg, Germany) measurement system with precision of 0.01 mm.

Time series of TRW were cross-dated and their quality was checked graphically and using the program COFECHA (Grissino-Mayer 2001). Mean time series of TRW for trees were produced and rechecked. Residual chronologies of TRW were produced using the program ARSTAN (Cook and Holmes 1986); double detrending with negative exponential curve, cubic-spline with 128-year wavelength and autoregressive modelling were used. Statistics of datasets were calculated using library “dplR” in R (Bunn 2008). Chronologies were compared using the Gleichläufigkeit (GLK) and Pearson correlation coefficients. Gridded climatic data: mean monthly temperature and precipitation sums were obtained from the Climatic Research Unit (Jones et al. 1999) for points closest to the sites. The effect of climatic variables on TRW was assessed by bootstrapped Pearson correlation and response function analysis using the program DendroClim2002 (Biondi and Waikul 2004) for the whole chronologies and by 40-year moving intervals. Time windows from June of the preceding year to October of the current year were used for climatic data. 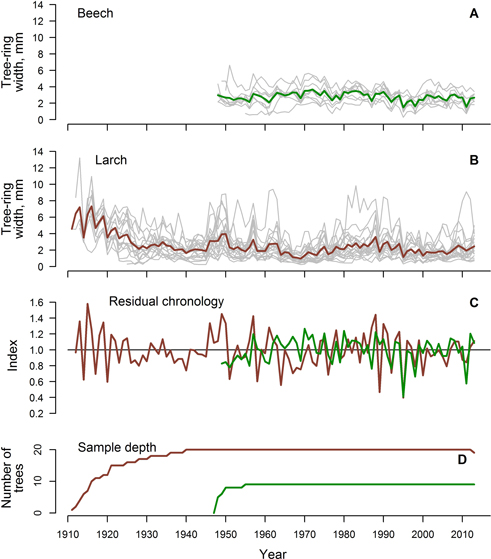 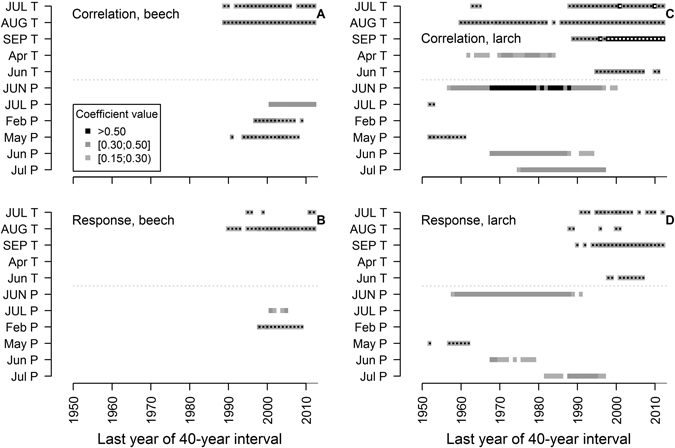 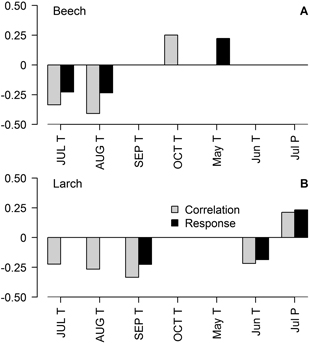 Good agreement of TRW time series, as shown by EPS > 0.85 and interseries correlation > 0.60 (Table 1), suggested presence of environmental signals in TRW of both species (Wigley et al. 1984). The synchrony between chronologies suggested that both species reacted to similar environmental events; however, a different intensity of reaction was suggested by low correlation between chronologies. The observed signature years (Fig. 2 C) coincided with climate-related pointer years observed for larch in Lithuania (Vitas and Žeimavičius 2010) or beech in Central Europe (Dittmar et al. 2003). Although both species occurred outside their natural range (Bolte et al. 2007; EUFORGEN 2009), a significant but non-drastic effect of the tested climatic variables on TRW was suggested by intermediate correlation/response coefficients (Fig. 2).

Drought related variables generally controlled TRW of both species, as suggested by the negative effect of summer temperature and positive effect of summer precipitation (Fig. 2), as was previously observed in Central Europe (Oleksyn and Fritts 1991; Dittmar et al. 2003). Growth of deciduous trees is partially dependent on nutrient reserves, which are formed at the end of the vegetative period (Barbaroux and Breda 2002; Sudachkova et al. 2004), thus, explaining the effect of climatic conditions in the preceding year (Fig. 2). However, response function coefficients suggested that climatic conditions in the previous year had stronger effect on beech than on larch. Observed changes in TRW-climate relationships and the intensification of the effect of drought-related variables, (Fig. 3) might be explained by warming or alternatively by aging of trees (Carrer and Urbinati 2004). The positive effect of April/May temperature was also observed (Fig. 2), but apparently, it had likely weakened since the 1950s (Fig. 3).

Tree-ring width of larch and beech in western Latvia was not narrow (suppressed), suggesting suitability of growth conditions. Climate-TRW analysis suggested that increment was generally limited by climatic variables related to summer drought; a negative effect of temperature and positive effect of precipitation was observed. The expected effect of winter-spring temperature has lost significance, suggesting successful acclimation of the studied trees in stands growing northwards from their natural distribution.

The study was funded by Forest Competence Centre (ERAF) project “Methods and technologies for increasing forest capital value” (No. L-KC-11-0004) and Latvian Council of Sciences project “Adaptive capacity of forest trees and possibilities to improve it” (No 454/2012). We also acknowledge Kārlis Taukačš and Juris Kalniņš for help during the sampling and Didzis Elferts, who helped with arrangement of climatic data.